FEBRUARY, 1933 - this article appeared in the Portland Press Herald Learning that the thick ice would prevent the regular steamer from touching at Great Chebeague Island, five young men Sunday morning risked their lives by driving across the ice from the Island to Falmouth Foreside for the sole purpose of obtaining the Islands supply of Sunday Telegrams.

Coaxing the motor of a dilapidated light truck into functioning, the men, Milton L. Webber, 30, the driver, Elliot H. Thompson, 21, Richard H. Bowen, 21, Clyde L. Bowen, 18 , and Albert S. Bennett, took off from the north side of the Island, set a course in back of Cousins Island and then followed the main shore to Town Landing. Here they pushed and tugged the truck through deep snows, managed to reach the main highway and a short time later arrived with a flourish in front of the Press Herald Building. Old timers like to recall that in the Winter of 1917 and during previous cold snaps that horses and sleds were frequent sights on ice-locked Casco Bay. But the trip of the your adventurers undoubtedly marked the first time that a truck has been driven from Great Chebeague Island to Portland and they also probably established a time record between the two points, covering the approximately 14 miles in three-quarters of an hour.

With the island's supply of Sunday Telegrams in the rear of the truck, the five men left Portland shortly after noon and expressed the belief that they would make the return trip over the ice in a half hour.

The quintet quite gravely explained that they carried a long coil of rope to pull the truck back onto solid ice if it should strike a thin spot and break through but merely shrugged their shoulders when asked what would have happened to them. From Webber, the driver, came the explanation that the anchor resting in the body of the truck was to be used to anchor the vehicle in case that it did go through the ice and they could not recover it.

"Why we would just anchor it so that it wouldn't be carried away by the tides and currents and then would go back after it in the Spring," said Webber.

The quintet decided to make the trip after learning that the Emit the passenger steamer, carrying the Sunday Telegrams was able to plough through the ice only as far as Long Island. The start of the trip was delayed somewhat because they had to coax the motor into functioning and then had to tug and push the laboring machine through deep snow to reach the ice.

But after it struck the ice, the motor had a new lease of life and the truck soon was skimming across the bay. Several times during the trip Webber stopped his machine while the other four went ahead with axes to determine the thickness of suspicious appearing spots. The only trouble experienced however, was caused by the snow which in some spots had been whipped into drifts by the wind. The adventurers reported that in some spots the ice was two feet thick and even in the thinnest sections, near the shoreline, was two inches thick.

FEBRUARY 27, 1950 - This article appeared in the Portland Press Herald

Meredith Bowen, 4, and Stephen Johnson, 5, were a bit piqued to note by the Press Herald that five Westbrook Junior College girls had been the subject of front page pictures because they'd jumped the gun on the weatherman and gone for a swim at Casino Beach Monday.

Intrigued by the springlike weather, the youngsters wandered to East End Beach and decided Feb. 26 would be ideal for a dip in the ocean. Leaving their clothing on the porch of a summer cottage, the boys romped for the water, wearing naught but their birthday suits.

Meanwhile, Mr. and Mrs. Clyde Bowen and Mr. and Mrs. Sherman Johnson became alarmed at the lengthy absence of their sons and started a search. Father Bowen arrived at the scene just as Meredith was tugging on his shirt, shivering to beat b'jabbers.

Warm baths, hot drinks and blankets successfully fought off colds and Poppa Bowen, at least, asserted that his offspring would "be warm in one place" when "home treatment" was ended.

Photo which appeared in the Portland Press Herald

ICED IN - The channel between Cousins Island, foreground and Chebeague Island remains frozen solid in spite of attempts by Coast Guard and the skipper of the school boat Glorianna to keep passage ice-free. The boat is tied up at the Cousins Island landing while Chebeague's 22 high school and junior high school students make a roundabout trip to school by Casco Bay Lines ferry from Chandler's Cove on the seaward side of the island to Portland and then by bus to Cumberland. Ordinarily students and other residents cross the channel to Cousins Island, which is in Yarmouth and joined by bridge to the mainland. The Coast Guard said it has been busy breaking ice elsewhere in Casco Bay and at other nearby areas of the Maine coast but may be able to clear theChebeague channel today. Weather story on page one.

Photo which appeared in the Portland Press Herald 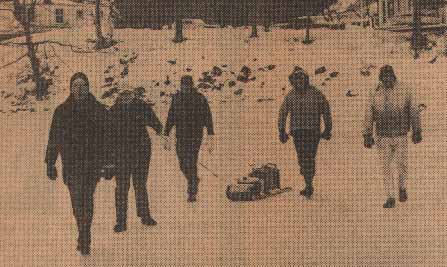 ISLAND TO ISLAND ON FOOT - Five Chebeague Island residents leave Cousins Island Wednesday on a trek across the ice-locked channel between the two islands, the first time in eight years foot travel between the islands has been possible. They recalled other such trips in 1957 and 1934. The trip, slightyly more than a mile, took the group 30 minutes. They draw a toboggan carrying gasoline for mail deliveries on Chebeague. From left are Charles Kuntz, caretaker at Ballard Estates; Mark Kuntz, his nephew and a student at Southern Maine Vocational Technical Institute; James Kuntz, Charles' brother; Emery Dought, Chebeagu postman, and Calvin Doughty, his brother, a clam fisherman.